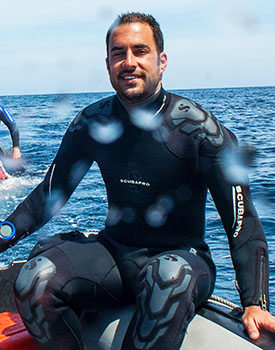 Jorge Santamaría Pérez graduated in Biology at the University of Salamanca and did an Erasmus Mundus Master of Science in Marine Biodiversity and Conservation (EMBC+) at different European universities. Currently, he is doing his PhD at the Marine Resources and Biodiversity research group (GRMar) from the University of Girona (UdG), under the supervision of Dr. Emma Cebrian. For his thesis project he is working with the invasive alga Caulerpa cylindracea, one of the most invasive marine species worldwide, in order to better understand its invasive process on the benthic communities from the Mediterranean Sea. In particular, he is interested in finding the biotic and abiotic factors that might affect Caulerpa´s invasibility and understanding the characteristics and traits of the native assemblages that make them more resilient to invasions. With all this information, he hopes to unveil the synergistic effects that climate change and seaweed invasions might have on Mediterranean native habitats and he will generate predictive distribution models that could aid in the design of effective management plans, not only for Caulerpa cylindracea but for other invasive species. His research is supported by La Caixa Foundation and develops within the ANIMA project, from the Spanish government.

Previously, Jorge has worked conducting and supervising snorkeling activities at Chumbe Island (Tanzania) and he has participated in the monitoring and restoration of Mediterranean marine macroalgal forests, where he still collaborates with his teammates.