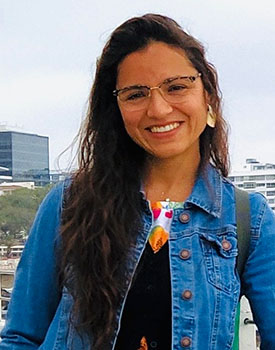 Macarena Marambio is a graduate in Veterinary by the University Mayor of Santiago, Chile (2007) and then she studied a master degree in Biodiversity Conservation at the University of Cádiz (2011). She has previously worked in marine turtles conservation in different community-based conservation projects covering feeding and nesting areas. She has been working the last 10 years in the jellyfish research line of the ICM including coastal samplings, laboratory experimentation based on the study of gelatinous zooplankton physiology and the growth and maintenance of jellyfish in aquarium to study the different stages of the life cycle of different species. She has been involved in the coordination of European and national jellyfish projects mainly focused on coastal management and citizen science approaches. Currently she is working as a technician in the MPA-Engage Project (Engaging Mediterranean key actors in Ecosystem Approach to manage Marine Protected Areas to face Climate Change) funded by the EU Interreg- Med Program. She is also involved in the citizen science project Observadores del Mar coordinated by the ICM-CSIC, as part of the coordination team and as the administrator of the project Jellyfish Alert inside the platform. Presently she is also carrying out her PhD at ICM under the supervision of Josep Maria Gili and Jennifer Purcell. Her project aims to understand the jellyfish blooms mainly in the Catalan coast analysing data from the last 20 years, and working in the development of different strategies and tools to be implemented as prevention and mitigation of the impact caused by the jellyfish blooms in coastal areas.