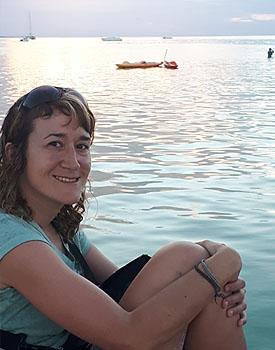 Blanca Figuerola is a postdoctoral researcher at the Institute of Marine Sciences (ICM-CSIC) of Barcelona. She has been working in different fields including taxonomy, biodiversity, ecology and paleobiology. Apart from her ongoing taxonomic and biodiversity studies in bryozoans, her current work aims to 1) deepen current understanding of the skeletal structure, mineralogy and geochemistry of benthic marine calcifiers in order to identify taxa that may be particularly vulnerable to climate change and may make suitable indicators to monitor the effects of near-future changes and 2) use their fossil record to reconstruct natural and human-driven changes (e.g. ocean warming and acidification, hypoxia) in coastal ecosystems and be able to make better predictions of the effects of future climate change on benthic communities.

She obtained her B.Sc. Biology and PhD at the University of Barcelona. Her thesis focused on presenting new data on species richness and the spatial patterns of bryozoans from poorly known regions and evaluating the ecological and applied effects of their natural compounds. After her PhD, she has received several grants/fellowships including competitive fellowships such as COMNAP Antarctic Fellowship (2016), SENACYT- STRI (2017) and Juan de la Cierva-Incorporación (2018). During her postdoctoral research career, she has worked at renowned international research institutions such as Smithsonian Tropical Research Institute (Panama) and Australian Antarctic Division (Australia). There, she has participated in numerous multidisciplinary projects involving fieldwork in Antarctic, temperate and tropical regions. She has also be involved in several science outreach programs about marine conservation at several public institutions, companies and NGOs (e.g. Plancton, SUBMON and GEPEC).